2020 was a record breaking year for video on demand (VOD) services as households signed up in droves for entertainment to entertain and distract from world events. The growth last year was seen by many to be an acceleration of a trend that was already well underway, with major brands, such as Disney+ and HBOMax, launching new VOD services that had been months in the planning.

For OTT VOD providers, whatever model they are adopting, there are some fundamental challenges they must overcome to deliver content to as many customers, in the most efficient way possible.  Here are four top challenges for consideration:


Cost-effectively maximizing the reach of OTT apps and content in the context of huge variability in device types, operating systems, and middleware is a major consideration for OTT VOD providers.

According to the Conviva 66% of all viewing hours are spent watching the big-screen (connected TV devices or smart TVs), making TV the screen of choice by far.  However, many set-top boxes and smart TVs don’t meet the processing and memory demands of today’s OTT apps. Enabling apps to work on these devices, often requires a new set-top, a third-party OTT device, or an HTML5 app back-ported to the existing device.

2. Delivering services to as many devices as possible


Consumers constantly explore new OTT services and content via their remotes.  From streaming sticks/ or dongles, gaming consoles, smart TVs, and modern set-top boxes, the big-screen is the new “portal” for all TV and OTT experiences.

However the increasing number of devices, combined with different middleware and operating systems puts tremendous pressure on optimizing, launching and maintaining apps for every device type. Often developers find themselves prioritizing platform choices based on the fit of their content to a specific device-using audience; subscriber acquisition and loyalty on that device; and technologies - such as DRM, advertising, and analytics.

Flexible coding languages provide a degree of ‘write-once, use-everywhere’ code automation however they rarely integrate with base-level hardware capabilities which are native and unique to every device type (such as network, DRM, buffer/codecs, GPU or IO etc). Neither do they address extensive app/device testing and validation required.

The challenge is crystallized as ‘more apps, more devices, more operating systems, more complexity…’ This conspires into a forced trade-off between app reach and the operating expense of porting and maintaining apps across multiple platforms.

Consumer motivation to switch from traditional PayTV services is fuelled in a large way by a desire to gain more control over what they watched, when, where and how they want, while also reducing monthly subscription costs. However, as each new SVOD OTT service drives demand for its unique content, consumers are expected to pay additional subscription fees. For some, these monthly fees quickly add up to beyond the original costs they were looking to reduce!

The United States is a market where these dynamics are in sharp focus. According to Antenna SVOD subscriptions have grown 37% annually to Q3 2020, up 4% from Q2 the same year. During this same time period, a study by Deloitte identified that an ‘average’ US consumer was paying for 12 media and entertainment subscriptions, peaking among millennials who subscribed to an average of 17. Of these, the study found an average of four were SVOD services.

So while these subscriptions included more than OTT VOD services (cable, music, gaming etc.), the rapid adoption and market growth of subscription services raises the issue of subscription anxiety. Forty percent of Millennials described feeling ‘overwhelmed’ by the volume of their subscriptions and 43% intend to reduce them. When applied to SVOD, fatigue starts to manifest itself in the monthly churn rates, with a quarter over quarter increase in Q3 2020 of 6.2% monthly.

SVOD fatigue does not affect all providers equally (Netflix, with 35% of the US market at time of writing, demonstrates the most loyal subscriber base), however it is a trend that is set to continue. While the market continues to grow, this may not present so much of a challenge to OTT providers but the moment growth slows or stalls it will become painfully acute, and likely to drive considerable consolidation. 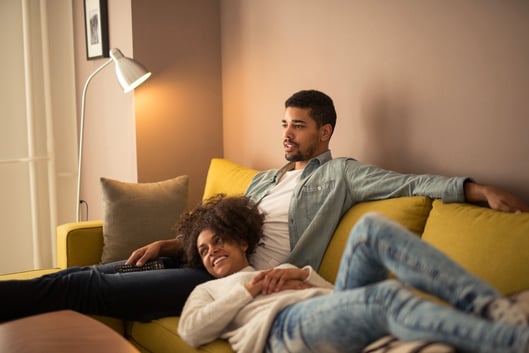 4. Standing out against all other services

The OTT VOD market is both large and growing. Titans such as Netflix and Prime Video have already established benchmarks for content breadth, user experience and subscription costs, in the minds of consumers.

For any prospective new entrant, a clear point of differentiation must exist. A growing contingent of viable, niche providers are gaining traction, opting for more unique content curated and targeted to well-defined fan bases. Inherently these niche services have limited reach in a single geographic market - according to BCG in 2020 “while niche services have seen good traction, no single service has gained more than 5% of the total share”. Nonetheless, the niche approach presents another way to gain a foothold in the market.

Within niche providers, new variants of business models have started to appear. One of note is a ‘tipping’ model - where content is both ad and cost-free, with a payment platform provided for viewers who want to make a contribution towards the content they enjoy. There is no substantive data at this time to support whether this will work or gain traction, but the innovation exists and is being tested among niche content offerings.

Local content and local language also presents a viable angle for differentiation. Many western viewers may not have heard of iQIYI, Tencent or Youku, but they represent three of the top five video streaming services globally, serving dominantly the China market.  With more than 320m subscribers according to the FIPP/CeleraOne Global Digital Subscription Snapshot, their combined audience rivals that of Netflix and Amazon’s Prime Video. These established western brands are not standing still of course, and seek to globalize their own offerings either through developing and syndicating local language content to expand offerings and appeal in new geographies.

One mostly unaddressed area for providers is with the millions of subscribers around the world using legacy set-tops for viewing. It is estimated there are more than 300m legacy devices deployed globally which were never designed to deliver TV app-level functionality. That does not necessarily preclude access to this market. Although the devices themselves may not be able to host or run apps, virtualization presents a clear solution to the problem.

Read more about OTT VOD services in our complete guide.