OPINION: Quibi's End is a Triumph for TV

Quibi will shut down on December 1, five weeks after co-founder Jeff Katzenberg announced that the short-form video streaming service was not viable. This is death without resurrection: the company will be liquidated, the cash refunded to investors, and the content IP returned to its creators after four years. Six months from launch to crash. With $1.75 billion investor backing, why did Quibi fail so spectacularly?

While Katzenberg initially attributed "everything that has gone wrong to coronavirus", he later was open to observing that "the idea itself wasn’t strong enough to justify a standalone streaming service". Silicon Valley's opinion -- if such a thing can be homogenized -- is that Quibi was a traditional media monolith, not a novel tech take: they chose to ignore the practice of starting small, seeing what the market wanted, and iterating. Others highlight the service's lack of break-out content. All of this thinking has been explored by others elsewhere, but I'd like to introduce another probable cause of Quibi's downfall: the resilience and growth of home streaming in general, and the home theater specifically.

Quibi targeted a younger demographic with short-but-high-production episodic content called "quick bites" (thus, "Quibi": "QUIck BItes". Sigh.), intended to be consumed in the "white space" of odd intervals of down-time over the course of a day. Short-form video is hot, shown not least by Tik-Tok's 75% growth since the beginning of the year, and its 53.5M weekly average users (compared to 450k active users at the time the shutdown was announced). But Quibi and Tik-Tok have little in common outside the broad brush of short-form video: Quibi episodes are well-produced and 10-minutes long; Tik-Tok content costs nothing and max out at fifteen seconds. The length and production of short-form content is tied intimately to an appropriate viewing medium, and Quibi's mobile-phone-only launch in April was a not-insignificant contributor to its downfall.

Mobile is a massive market, but it's not the only one. Steadfastly adhering to a mobile-only philosophy was central to Quibi's thesis, but constrained the addressable market considerably and alienated users immediately.

I was excited about this platform and then I read it's only to be viewed on your phone? Is this shit for real? I don't even want it for free now. What a waste. Reminds me of when I'd watch shows on my ipod. So backward.

Why such vitriol? I expect this was, somewhat ironically, due to Quibi's production value and length. Great production merits a big screen, and episodic content requires a measure of emotional investment and continued attention better suited to a more immersive environment. It might be too pithy to say that Quibi's short content was not short enough, but fundamentally the apparent mismatch of content and screen was a factor of some significance in the service's failure to gain traction.

Ultimately, TV remains the best possible medium for viewing video content, and everyone is streaming. This is in-part due to the incredibly high quality of the home theater setup: not only are TVs getting more popular and larger, soundbars are also making significant, complementary in-roads into the home theater market, finally completing the audio portion of the cinema experience. Why watch your favorite show on your phone when a superior sensorial experience is available in your living room at commodity prices? The trend towards inexpensive and immersive viewing environments is only likely to accelerate (e.g. Walmart's $88 43-inch flat panel); while none of want to see cinemas go away, they won't be coming back soon after COVID, and it would not be speculative to suggest that the the 2020 TV and soundbar sales figures, when released, will show a massive consumer investment in home theatre hardware. 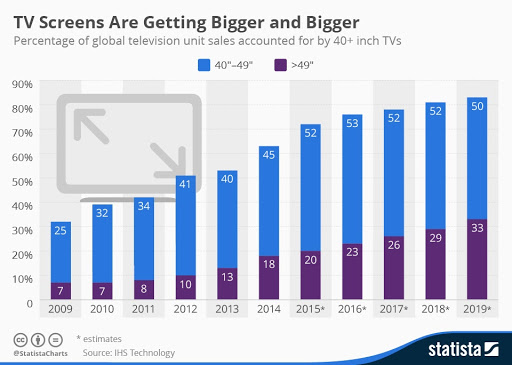 Quibi eventually reconsidered their mobile-only position and released the app on the Android TV and Apple TV platforms, but not soon enough; the news of their launch on streaming platforms was quickly drowned by the news only a few days later that the entire service was shutting down permanently. Quibi's failure is a well-hashed lesson in how not to launch a new streaming product, but ultimately may prove to be nothing more than an abandoned waystation on streaming TV's path to dominance, driven by content abundance and the technical sophistication of home theater hardware.